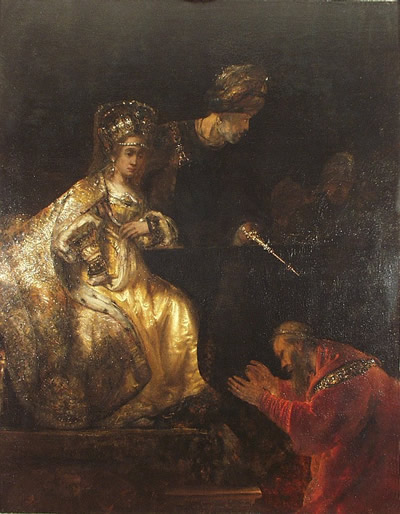 “Then Harbona, one of the eunuch’s in attendance on the king, said, “Look, the very gallows that Haman has prepared for Mordecai, whose word saved the king, stands at Haman’s house, fifty cubits high.” And the king said, “Hang him on that.” Esther 7:9

I was never a child star. On the only occasion that my grade school put on a play, I had only a couple lines. At the time, I was a little resentful. Other students had more lines, were given a more significant role, were spending more time in the spotlight. All I had were these two measly lines.

In the biblical story – what Craig Bartholomew and Michael Goheen call “the true story of the whole world” – Harbona is one of those ‘one line’ characters. Haman plots to destroy the Jews. Mordecai saves the king, counsels Esther, and is honored. King Ahasuerus has incredible power. Esther skillfully and wisely works to rescue her people from destruction. Yet, Harbona is simply a eunuch who serves the king. He is on the margins of society and on the margins of the biblical drama. He lives in the background, likely unnoticed by the likes of the king. Yet, Harbona has one line:

“Look, the very gallows that Haman has prepared for Mordecai, whose word saved the king, stands at Haman’s house, fifty cubits high.”

Harbona has one line, but what a line it is. Esther has just revealed Haman’s dastardly plot and the king has walked off in rage. When he returns, he sees Haman falling on Esther’s couch and assumes he is sexually assaulting her. The king’s rage begins to boil over, but the infantile Ahasuerus does not know how to channel it. In steps Harbona, pointing the king to a perfect outlet for his indignation. Haman is hanged and justice is served. All with only one line in the story.

What line has God given you?